, the probability of a trajectory

Denote the expected return as

. Let’s try to find the improve a policy through gradient ascent by updating 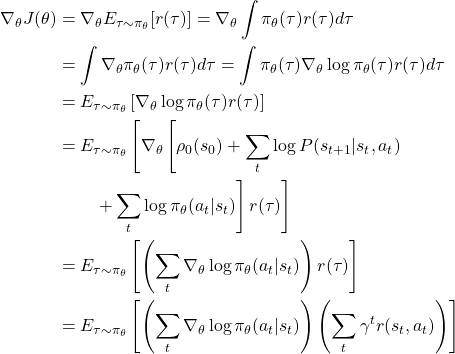 trajectories, we can approximate the gradient as

The resulting algorithm is known as REINFORCE.

One great thing about the policy-gradient method is that there is much less restriction on the action space than methods like Q-learning. However, one can only learn after a trajectory is finished.  Note that because of causality, reward before the current action should not be affected by the choice of policy. So we can write the policy gradient approximate in REINFORCE instead as 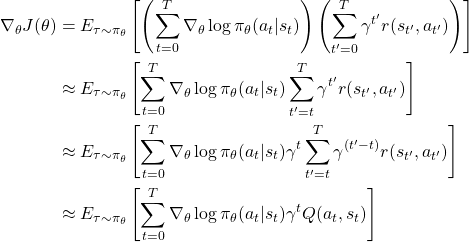 Rather than getting the reward from the trajectory directly, an actor-critic algorithm can estimate the return with a critic network

. So the policy gradient could be instead approximated by (ignoring discount

One problem of REINFORCE and the original actor-critic algorithm is high variance. To reduce the variance, we can simply subtract

by its average over the action

is known as the advantage function and the resulting is known as the Advantage Actor Critic algorithm. That is the policy gradient will be computed as