Here I will derive Kalman filter from belief propagation (BP). While I won’t derive exactly the closed-form expression as Kalman filter, one can verify numerically that the BP procedure below is the same as the standard Kalman filter. For derivation to the exact same expression, please see here.

Kalman filter is a special case of Gaussian BP. It can be easily understood as three different propagation steps as below.

This is a bit trickier but still quite simple. Let the covariance of

. And from the perspective of

Say one message votes for

(precision is the inverse of the covariance matrix).  And say another message votes for

Let’s utilize the above to derive the Kalman update rules. We will use almost exactly the same notation as the wiki here. We only replace 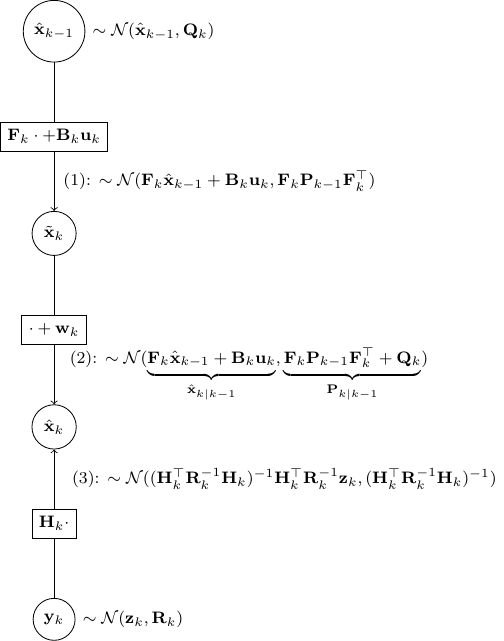 Finally, we should combine the estimate from (2) and (3) as independent information using the result in Scenario 3. This gives us the final a posterior estimate of

Although it is not easy to show immediately, one can verify numerically that the

and the mean above are indeed

in the original formulation, respectively.